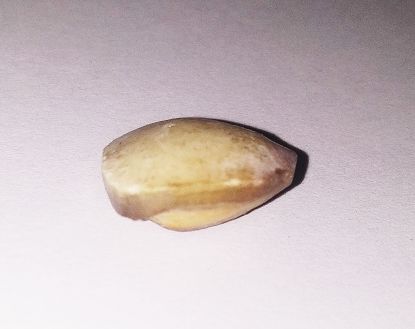 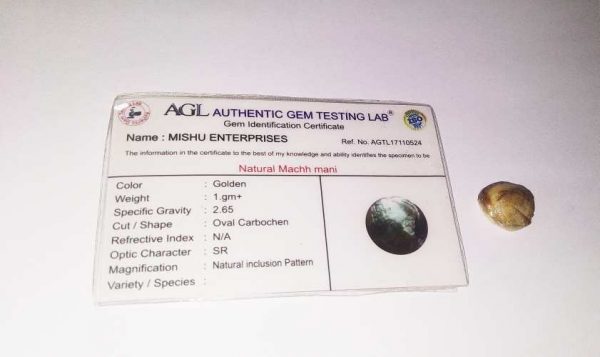 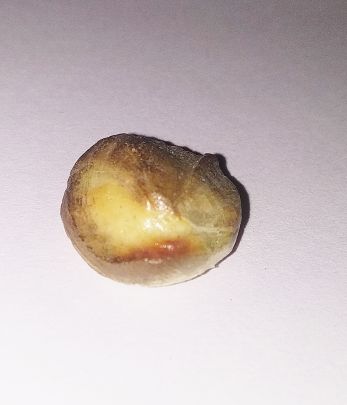 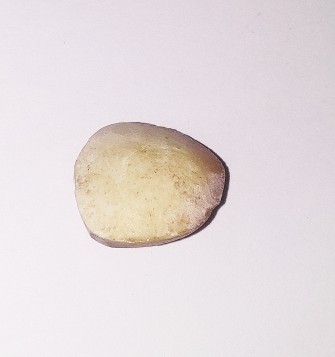 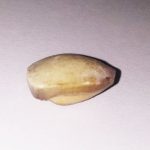 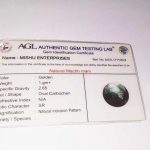 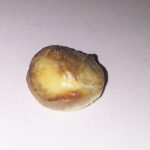 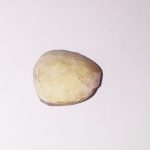 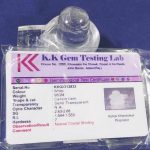 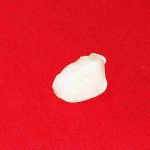 Abhimantrit Machh Mani (Fish Pearl) Lab Certified & Natural Stone- in Silver Locket
0 out of 5
( There are no reviews yet. )

Mach Mani Stone Gems is an ancient gem, but due to non-publication, it could not be practiced. The story of this gem is directly related to the Ramayana. In the Ramayana, the story of a son of Hanuman comes. His name is – Makardhavaj. Makarajwaj was born from the womb of a fish and not only a fish but he was also a mother. He took out his gripping stone to protect his son and handed it over to his son (Mukhkarj). It is such a story that Makaradhavaj was born in Rahu period. These fishes will be used to protect the bad influences of Rahu and the diseases of people in Kali Yuga. Machh Mani The Maach Mani gem is not an ordinary gem, it is very rare gem. The person carrying it spends a happy life by coming out of all kinds of work stress. This is the perfect gem for the prevention of Rahu planet obstruction.Brown colored stones formed within fishes. Gives uncountable wealth and blessings of gods. Cabot, a stone in a particular fish, possessed the power of foretelling weather, being clear and shiny when the skies were favorable, and cloudy when portending storms. Fish pearl – This fish pearl is like the eye of fish but Directly from hands of AcharyaAAA GradeRemove all bad luckRid black magic Increase your businessAttract wealthMaintain health Draw loveBy displaying this holy pearl in your home. Others will admire and idolize you. Love and respect will stay with you all the days of your life.The pearl awards one with inner light, spiritual effulgence and memorizing powers.Related to the Matsya Avatara of Lord Vishnu. Generally causes things to grow huge, and improves good luck, business, social standing, personal charisma, attractiveness, intuition, all-around healing, sexual strength, and peace with envious creatures. Ideally this talisman pearl should remind one of God Matsya Avatar, as well as the earthly predicament.The Garuda Purana states in Chapter LXIX (69) “A pearl found in the mouth of a fish is a perfect sphere in shape and is marked by a yellowish hue, like the back of a fish as is occasionally found inside the mouth of a whale that frequents the unfathomable depths of ocean beds. “This fish gem is a highly precious treasure and should be preserved in the home for protection, good health, wealth and happiness . realization of ambition , recovery from grave illness, successful romance, happy marred life are the result of such a Mina Mukta.According to Varaha Mihira Meena Mukta gives great wealth, wisdom, physical wellbeing and happiness for all times to come. It is so sacred that if it is lost then it is never comes to hand again. It purifies kilometers of space where it is present. A great blessing indeed.Below is the translation of account written by Acharya from whose hand we took the pearl. Remember, there are many more benefits than stated. Simply by keeping the pearl in your home, you will see INCREASE, GOOD LUCK and BLESSINGS in everything that you do. All actions and desires will be blessed. Your wishes will manifest and your dreams WILL come true.This is a true occult treasure which possesses the innate Divine Supernatural Powers to finally change your life for the better!!!As you all may have read or heard in Balmiki ramayana chapter 621 that when Lord hanumana burnt Lanka and came out…..he was flying over sea…..his body temperature was too hot that time….due to high body temperature…..his body started sweating….one drop of his sweat fell in mouth of fish in sea…..a son was born due to that drop of sweat and he was known as Makardhwaj……this fish was caught byAhiravanawho was the ruler of Patal Lok, or the netherworld…he took the fish to cut it……then a monkey named makardhwaj was born out of womb of that fish…..he was carrying a gemstone in his hand…….Ahiravana asked MAkardhwaja how he took birth out of womb of a fish…….and what’s this stone in your hand…….then Makardhwaja told him that this stone came out of head of my mother…the fish…..Ahiravana felt sorry for killing the fish and made Makardhwaja his minister……later on when Ahiravana kidnapped Lord Rama and Lakshamana during their sleep to Patal lok on request of his brother Ravana….Lord hanumana reached there to set Lord Rama free……….Lord hanumana and Makardhwaja fought battle …..MAkardhwaja lost the battle and then he introduced himself to Lord Hanumana……..Hanumana hugged Makardhwaja…..then tied him with a rope…..Hanumana killed Ahiravana and his brother Mahiravana and set Lord Rama and Lakshamana free…….then he brought Lord Rama to Makardwaja to introduce them…..Lord Rama blessed Makardhwaja and made him king of Patal loka……and told him that this stone will come out of head of rare fish and

Brown colored stones formed within fishes. Gives uncountable wealth and blessings of gods. Cabot, a stone in a particular fish, possessed the power of foretelling weather, being clear and shiny when the skies were favorable, and cloudy when portending storms. Fish pearl – This fish pearl is like the eye of fish but big in size. This is a highly sacred Bezoar, which purifies kilometers of area where it is present. it destroy Vastu doshas and gives blessings of lord Varuna. Fish symbolizes Meena Ketana –(lord Kamdev the great wish fulfiller). So it is gratifies all your desires and gives emancipation at the end of life as spices is the symbol of emancipation. It also confers great prosperity as the symbol of Maha Laxmi, the wealth god of Hindu.

Mihira explains it as a emblem of virtue, truth, wisdom and wealth. Even it is believed to give emancipation after

death. One of the best variety of fish pearl.